Rowan was the only returning keynoter this year, actually it was his third time on the EC stage. Rowan opened with a title and discussion of “the collaboration era.” He also talked about how much fun he is having. As I examine these keynotes, I try to focus more on the content than the delivery, but that is hard with Rowan. He tends to speak personally to the audience, and lays groundwork as he builds his presentation. 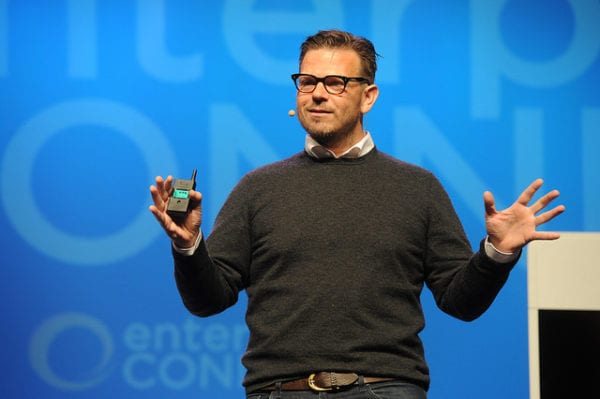 His 8 min intro didn’t contain anything new for those that follow Cisco, but certainly portrayed Cisco as a company that is on the move. Among the figures he presented was that telepresence unit sales were up 60%. Cisco has done this with a two pronged approach of fresh design and lower prices.

I found it very interesting that he rushed (about 2 minutes) the first three announcements. He downplayed them because faster, better, cheaper was not the story he wanted to tell. The announcements were

Realistically, there isn’t much more to say about those anyway. The MX800, for example, is a dual screen video conferencing unit. In a few sentences he managed to state it had dual 70” displays and included two cameras with SpeakerTrack as a standard feature. . The only thing really missing was a demo (which he managed to work in later).

The faster, better, cheaper mantra allows the audience to fill in blanks, so downplaying these announcements was a smart use of time, however, something wicked this way comes.

Cisco Spark requires context to better understand it, so Rowan took about 8 minutes to explain why something new (to Cisco) is needed. To do so he tells what will become a familiar theme on the keynote stage – that sitting still runs the risk of being what he termed as “Blockbustered.”

Rowan predicted that 40% of the Fortune 500 will be gone in 10 years and that incumbents are at risk because the disruptors are fast, nimble, and technically savvy. This pitch in a UC context is not new, and generally gets used to encourage prospects to become customers. In this case, I think Rowan was a talking more about Cisco itself. “Incumbents need to adapt.” The point being that it’s better to cannibalize your own business than be disrupted by another.

Businesses need to adapt – quickly. He referred to the agile enterprise, and positioned effective collaboration as a precursor to agility. He claimed we are entering the part of the information age where collaboration is key – “the collaboration era.” The old/current tools (which Cisco still offers) will eventually give way to something new. What could it be? 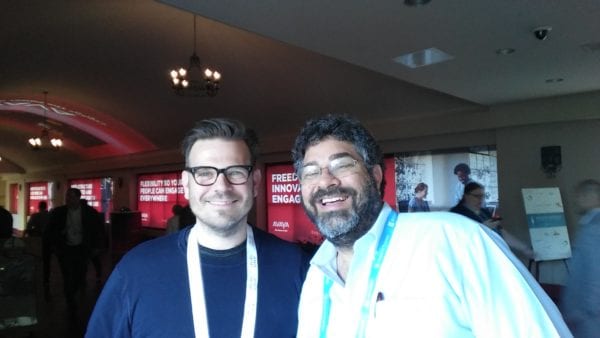 The big announcement was the commercialization of Project Squared, now known as Cisco Spark. For additional information on Cisco Spark, download this free TalkingPointz research report.

Spark consumed most of the keynote, including a 10 min demo performed by Rowan himself. Cisco invented the Chief Demonstration Officer, but I’ve always been critical of the use of a professional to demonstrate supposedly intuitive technology. Rowan demonstrated the interface for messaging and video from his phone, desktop, and the MX800. The example scenario was a team effort to complete a document. He created the room, kick it off, left the “room” and then shared the team’s output. All of the demo was with released available code, except for one preview feature (SIP URI dialing) to the MX800.

Rowan invited a guest on stage from Telstra who claimed over 600 Spark users via viral adoption.

In closing, Rowan came back to how much fun his job is and attributed it to working with the “best people” (employees, partners, customers) that are putting their “heart and soul” into their work. He said it was “the most fulfilling time in my career.” The entire keynote was in Rowan’s personal voice.

A very effective keynote. In addition to an excellent use of the venue with announcements and demos, he also provided context for Spark and established rapport with the audience. Personally, I think Spark is a risky, but likely brilliant move. It’s a delicate and difficult trick to balance today’s needs (of customers and of Cisco) with those of tomorrow.