Gary Barnett of Avaya opened his keynote to a ticking clock representing the pressure that modern businesses are under to keep up with technical innovation and the demands of users and customers. 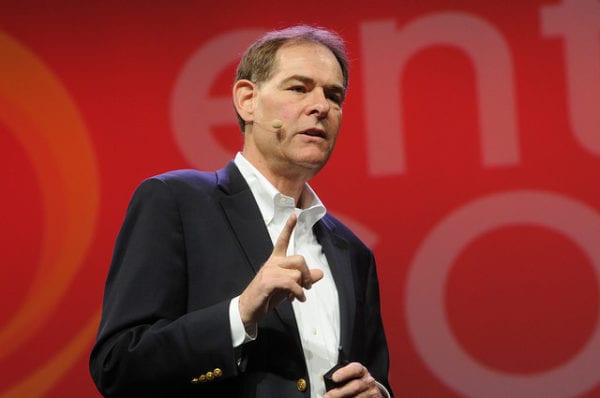 He spends the first 11 minutes of his keynote setting the stage for transformation. Gary shared that the average lifespan of the S&P500 company has shortened from 67 to 15 years. Presumably this is from a 2012 study at Yale, which begs the question if it is even shorter today in 2015.

Gary also referred to the quickening of adoption rates and offered examples of the telephone taking 70 years to reach 50 percent of households and ending with Google Plus taking only 16 days to reach 10 million users (2011). “The rate of adoption and engagement is accelerating.”  The operative word was “engagement.” Avaya believes the key to success lies in engagement, and has re-christened its UC suite as “team engagement” solutions and its contact center portfolio as “customer engagement” solutions.

Now here is where the flow get’s a little confusing. Transformation is critical, the key to transformation is engagement, adoption rates are increasing, Avaya understands fan engagement through sports sponsorships (such as Olympics and Avaya Stadium), and convergence is the enabler and challenge to innovation.

The last one, convergence, was confusing. Gary pointed out everything is converging including applications, devices, channels, and content thus it is an enabler. But he also listed convergence as one of the five “challenges to innovation adoption” (depicted as a cycle). When businesses address this new reality (presumably with Avaya technology), they improve their position to drive engagement – and quiet the ticking clock.

Some tricky transitions, but I think the message was engagement drives agility which is necessary to survive (and Avaya drives engagement).

Gary illustrated the simplicity and agility of the Engagement Development platform with a hypothetical crisis of an Internet hack. The solution (I was expecting a new firewall) involved a virtual help button to facilitate a fast response. The idea was that someone could use this “button”  to immediately create a meeting room and invite the appropriate staff via SMS and email. Staff would be identified by skills presumably in a corporate directory. He claimed that such a help button could be created without any code in about four minutes with the Engagement Designer tool.

That’s a powerful and dubious claim. I would have preferred Gary spending 8 minutes to create it on stage. Instead, Gary showed a completed workflow and demonstrated a drag and drop interface by doing some ad-hoc revisions. Does everyone with the skill of “security” get invited? What about contractors or resources that aren’t in the directory? Conceptually the graphical designer tool is powerful, but the example workflow seemed nearly as cryptic as code to me.

With a quick transition, Gary invited the CEO of Teleperformance, a provider of contact center services, on stage to share its recent success of video enabling the Callaway Golf mobile app. Teleperformance used the tools within Avaya Collaboratory to add live customer service (engagement) to an Avaya Elite Contact Center environment. A live video call from a smartphone was done on stage. 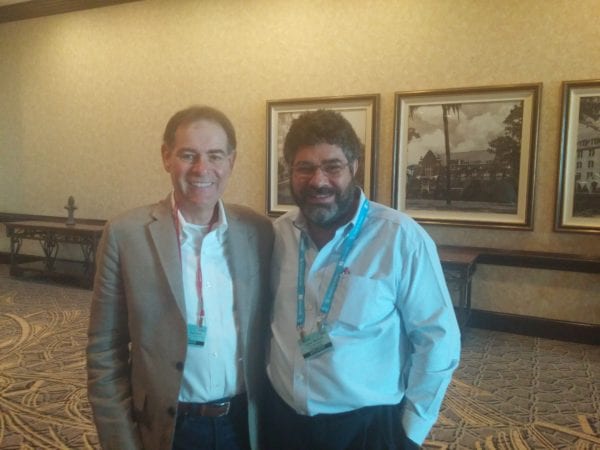 The live interaction included options for video (one-way or two-way) and audio-only, and the upgrade to the app was reportedly completed with only two days of engineering. That was a powerful demo with both a partner and a well known consumer brand. Presumably there are also hooks for website integration, but I checked callawaygolf.com and the “contact us” page only offers phone numbers – no click to voice-call or video-call. Why not?

The next guest was a familiar face at EC, Murali Sitram, now at Google and involved with global partnerships. Gary reminded the audience that late last year Avaya launched agent and supervisor applets for Chromebooks. Now, at Enterprise Connect, Gary announced Avaya Customer Engagement powered by the Google Cloud platform.

This was the biggest announcement and it was nice that Google participated, though Murali seemed more excited about the virtues of the Pixel Chromebook than the Avaya solution. Customer Engagement OnAvaya leverages the Google Compute Engine. The solution uses Chromebooks (and only Chromebooks) as endpoints and includes a webified live dashboard. It is not a contact center aaS play, more like contact center infrastructure aaS. It will be available through certified Avaya and Google partners this month.

This new solution offers a simple login on a simple device, improved security (by keeping client data off the endpoint), and extreme scalability (by Google). The final guest was from Onix, an Avaya/Google partner that had been using the pre-release version, echoed the benefits and stated it made more sense than using outsourced contact centers (like Teleperformance). The solution should offer some compelling financial benefits – inexpensive Chromebooks for phones and workstations, opex model, and no long term commitment.

Gary concluded his keynote with “predictions.” My comments in parenthesis.

Gary Barnett and Avaya made good use of the keynote. There were some continuity gaps in the flow likely due to keynote-by-committee. Avaya is highly focused on contact center and is significantly increasing its flexibility and capabilities regarding integration. I expected more on their SDN story, but it just got a mention or two. That was the right call based on both the audience and the content that did get shared.

Sometimes Avaya over complicates messaging with non-intuitive terms and slides which reduces a presentation’s impact. Terms such as team/customer engagement, convergence, partner, cloud-enabled, and full WebRTC capabilities (w/o video) likely have broader interpretations than Avaya realizes. As a point of casual observation, it is interesting that Avaya and others are leveraging public cloud infrastructure claiming unprecedented scalability and economics while Microsoft and Cisco are building their own cloud infrastructure with similar claims.