I recently wrote about digital transformation on NoJitter, and wanted to post here some clarifying examples. The point I want to emphasize is that every industry is now based on software. People get confused on this. I often hear “you can’t digitally transform a toaster,” but you can, so a toaster example seems like a good place to start. Software changes everything, even hardware.

I bought my June Oven almost two years ago. As an empty nester, the primary kitchen oven is too big (and too slow). The June is a counter-top oven that can be used as an toaster, dehydrator, slow cooker, air fryer, grill, roaster, oven, convection oven, and warming drawer.  Since it’s small and uses six heating elements it’s highly responsive. It has no knobs or buttons, rather a single, smartphone-like touchscreen on its door. More importantly it’s software based.

The June’s software tells it how to cook different types of foods. I can tell it what I am cooking through the touch-screen, but usually it just knows. The June has an internal camera and food recognition capabilities. 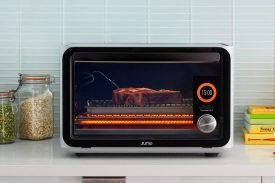 Let’s cook a steak! Put the steak in the oven with temperature probe inserted. The display confirms that a steak was detected, and the screen inquires about my preferred temperature (medium-rare, please). It then runs through a software routine that includes oven, convection, broil, and rest modes.

The experience is similar with most foods, though most items don’t require a temperature probe. The June also has a bunch of advanced one-pan meals such as Chicken and broccoli. The oven prompts the “chef” when to add items to complete the meal. None of the “recipes” involve a preheat cycle.

The June has become our go-to kitchen appliance. We use it for breakfast (it’s great at bacon), lunch (smashed burgers), dinner (everything), and dessert (it has separate programs for store-bought and homemade cookie dough).

Of course the June has a mobile app too. I mostly use the app to monitor cooking from a different room, but it will work anywhere. The app offers all of the information on the display including timer and temperature information – it also has a live camera view. The June is connected, so it keeps getting upgrades – including more recipes. June also offers a premium subscription with even more recipes.

I do have mixed feelings about the recipe subscription, but it’s fair game. The subscription provides recurring revenue and funds ongoing recipe development. I suppose if subscriptions are popular enough that they could even subsidize the initial purchase price of the oven. There’s even some kind of partnership with Whole Foods which offers pre-programmed cooking instructions on many of their prepared meals (I haven’t tried it).

This isn’t meant to be a product review, this is about digital transformation.

My full size range has no smarts, no connectivity, no camera, and no software. The manufacture has no plan for recurring revenue on my range beyond an extended warranty. Quite simply, it’s a big box that gets hot. It doesn’t know how to cook, or what a mobile phone is. This is all true with my dumb toaster too (now banished). If a competitor wants to make a better full size oven it’s not hard. If a competitor wants to take on June, they need to build a box, create recipes, develop a mobile app, and master food recognition algorithms. The June is currently on its third generation. Perhaps that’s why it was recently acquired by Weber (the grill company). Does that seem odd? Weber just announced connected grills.

I imagine the June concept will be mainstream-normal within 10 years. Not just on small ovens, but full size ovens and possibly even 2 slice toasters.