Enterprises that are tired of being hacked or impacted by DDoS attacks, must move to a new network architecture.  One that denies forwarding any packet at the edge of the network, unless there is an explicit policy to allow it onto the network.  In this age of cloud, mobile/BYOD, IoT, and internetworking, users and applications are usually on separate networks.  There is no longer a hard parameter with a clear demarcation point within the private enterprise network and nothing within the enterprise can be trusted. 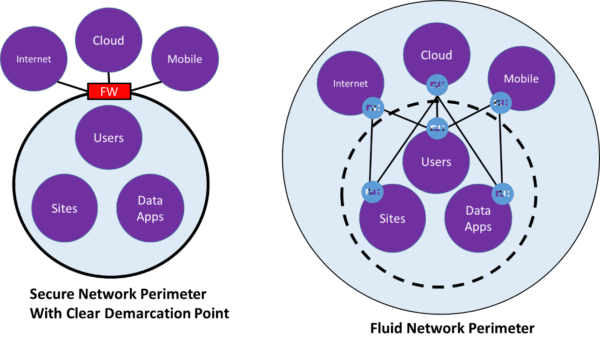 Deny All Networking (DAN) goes against the original objective of the Internet, which was to connect everything and have a default route if there was not a known path.  Enterprises, Network Service Providers (NSPs), and Cloud Service Providers (CSPs) spend 10’s of Billions of dollars putting in firewalls to control what packets can go where, with marginal success.  The fundamental problem with today’s architecture is packets are allowed onto a network and then at a network border, a security policy is applied to allow or deny it.

DAN is different than the Zero Trust Network (ZTN) architecture developed by John Kindervag of Forrester Research. The original ZTN architecture places security at the borders of the network and relies on firewalls and other very expensive network security products for enforcement.  These borders can be segments within an enterprise or cross domain networks. DAN proposed here places security at the very edge of networks and relies on cheap, stateful, session oriented routers that have layer 1-4 firewalling built in natively.

The foundational elements of Deny All Networking are:

With threats from exponentially increasing end-points coming from IoT and BYOD which are commonly on networks outside of the core enterprise network, the levels of threats are also growing exponentially.   DAN is more than segmenting servers and applications, it is end-to-end, dynamic, includes all end devices, and starts at the very edge of the network.

The first rule in a firewall is to “Deny All” traffic, then have specific policies on what to allow through.  Deny All Networking is taking this concept, and applying it to the routed IP network at the very edge of all networks.  The recent DDoS attack against DYN that shut down large parts of the Internet DNS service is an example of how the Internet is broken and why a new network architecture is needed.