I am surprised by how difficult big companies find creative thinking. I love T-Mobile because they think out of the box. I loved Steve Jobs because he was creative. Bill Gates wasn’t all that creative, but he was very quick to notice something creative and then steal it and run with it, which is still a good thing. 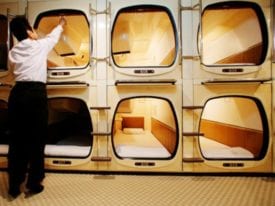 I happened to be talking with a Boeing executive the other day. Now as executives go, Boeing folks are locked into their corporate culture pretty hard. They aren’t called “The Lazy B” for nothing. But I tried to express how frustrating international travel was for passengers. The Boeing exec droned on and on about how the airlines were their customers, not passengers, and how airlines cut every corner and packed people in. It wasn’t Boeing’s fault that flying is a terrible experience.

I tried to pitch Boeing that the future of international travel was found in Japanese capsule hotels. (Google “Japan Capsule Hotel”). When you look at the cubic space an economy seat consumes, for 30% to 50% more space a passenger could have a capsule. This means that when economy seats were selling for $1,200 to Japan, a capsule could sell for just $1,800.

I believe there is a significant market for commercial airplane capsule seating. It would be half the price of business class, and would be comfortable. You could sleep on those 8~16 hour flights. You could work. You wouldn’t arrive tired and grumpy and sore.

But the Boeing exec wouldn’t hear me out, he wouldn’t even listen. His mind was closed. It couldn’t be done. Nobody would want it. It was unproven. None of their customers has ever asked for such a thing.

I would bet half the space on an airplane would sell with capsules. Yes, there will still be those who choose sardine class. But it would be a differentiating feature.

This lack of creativity is why airlines struggle to stay in business. They just sell a commodity product.

Come to think of it, this is much like the telecommunications marketplace, isn’t it?