“Going forward into Q1, we’re winding down and exiting conferencing hardware sales, as we will now be fully focused on expanding the availability of the Dolby Voice experience through software solutions, such as interactivity APIs on our developer platform.

But the vision remains unchanged.

Let me spend just a few moments on Dolby Voice. We entered the communication space with the goal of enabling higher quality and more natural meeting experiences. Our value proposition of enabling higher quality interactions remains as strong and relevant as ever and we see significant opportunities to broaden the reach of our technologies. As we move forward, we are winding down the sales of our conferencing hardware to focus all of our efforts on the larger opportunity to enable the Dolby Voice experience through our enterprise partners and our developer platform. 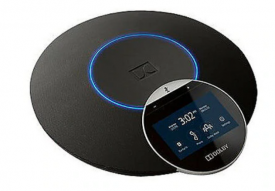 First, a Hunger Games moment of silence for The Fallen.

Dolby fought a good fight. The hero’s journey could even make a great movie – about a giant’s realization that its core skills are applicable to a different world. A struggle over eight years involving partnerships that ends in triumph with marquee customers. Believe me, this film would have an amazing soundtrack.

Dolby Voice started as conference calls for audiophiles. It did three things really well: (1) It picked up audio. Sounds trivial, but it’s not. I found that a conference room with a Dolby saucer required no adjustment to normal speaking. No need to lean in or even face the table if speaking while drawing on the board. If the audio could be heard in the room by human ears it worked with Dolby. (2) Spatial audio. This is one of my favorite parlor tricks, but there’s a catch. It requires the participants wear (2 ear) headphones. Since I don’t share my office I generally don’t wear headphones, but for those in a cube it’s a nice benefit. Spatial audio is easier and less stressful. Turns out your brain really values spatial audio. (3) noise reduction. This is of course what Dolby is primarily known for. Today, every conference company is yapping about noise reduction, but Dolby was way ahead of the pack on this very important concept.

Dolby Voice had two components: back-end servers and optional room hardware. Like all things audio conferencing, Dolby Voice expanded into video. As the old saying goes, audio is more important than video in video conferencing. Initially, Dolby saw video conferencing as a means to sell more audio infrastructure, but began offering its video endpoints without the backend software. The products were sold through partners only – including BlueJeans, BT, Highfive, PGi, and Intrado, I figure most of the engineering is done, so there’s no real reason to “wind-down” the business. Dolby said the pandemic has harmed its business, and sacrifices need to be made. In that sense, conferencing hardware is an obvious pick. Dolby was never going to be a leader in conferencing hardware, so it got Jack Welched. [Welch was considered one of the best CEOs in the world during his term at GE. He is often associated with a strict policy: every GE business had to be first or second in its market, or be fixed, sold or closed.]

Conferencing hardware was initially a means to sell Dolby software. The hardware was a means to an end: showing what was possible in conferencing. I doubt there were ever any plans for hardware to be a long term business. Like so many other things, Covid-19 likely accelerated the schedule. I figured Dolby might want to sell the business, but there’s no indication they are shopping it. Selling the unit is probably a bad deal: not valuable enough to deal with the IP issues. I also wonder where Dolby devices were in their tech lifecycle. The world seems to be moving to Android. Dolby and Google are the outliers, running their room systems on Chromium. An expensive upgrade to Android and Arm may have been a factor too.

Dolby is not exiting Dolby Voice software (not all of its partners sell Dolby hardware). Licensing is really the Dolby model anyway. My first Boom Box (circa 1980) had Dolby technology as have most of my audio devices since. The company has worked closely with Apple for years, and just announced a Dolby Vision recording capability on the iPhone 12. It also recently announced Dolby Vision and Atmos on Disney+ and Apple TV. Dolby is likely making your life better with PCs, Macs, Amazon Music and Echo devices, gaming consoles, Google Play, Showtime, and PBS began streaming in Dolby — to name a few.

Actually, Dolby.io is looking a bit similar to Nvidia’s Maxine cloud-native streaming video AI platform which allows developers to leverage cloud-based audio, video, and conversational AI software in their apps as a service.

The obvious winners of Dolby’s hardware exit are Logitech and Poly. I’ve had a few conversations with Dolby customers that are looking closely at Poly and Logi already. Cisco too benefits as it offers the widest selection of room systems, and Dolby (like Cisco) competed on higher-end features and capabilities. Some customers saw Dolby as a Cisco replacement.

I am sad to see Dolby exit the space, but it wouldn’t be enterprise comms if things stood still. Both BlueJeans and HighFive were committed to Dolby, and were acquired this year (by Verizon and Dialpad). BT just expanded its partnership with RingCentral. Dolby hardware lifecycle occurred during my shift. I remember seeing the early mock-ups of its “cheesecake” saucer. I remember the phone booths at Enterprise Connect. I’ve said before that Highfive had one of the more versatile approaches to room systems, and that was in part due to its Dolby partnership. Dolby may have been first with spatial audio in conferencing, and was the first to demonstrate ghosting in conferencing.

The video hardware industry is better because of Dolby.