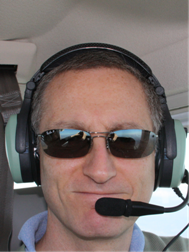 Laurent Philonenko is the Vice President and General Manager of the Unified Communications Business Unit at Cisco. He is also Cisco’s Interim CTO for Unified Communications. He is involved in several company cross functional initiatives including driving the integrated collaboration roadmap encompassing all the Cisco collaboration products.Prior to his current position Laurent, was senior vice-president at Alcatel and then moved to become CTO, then COO and CEO of Genesys Telecommunications after Alcatel acquired Genesys in 1999. He has also held various technical and sales roles at Digital and IBM.Laurent is a native of France, but currently resides in San Francisco. He lives and breathes the technology he espouses. In fact, he regularly takes mobility to the skies as a pilot and aviation enthusiast.

Laurent served in the military at an Air Force base (France) and was befriended by jet fighter pilots who took him on several training missions, sparking a passion in aviation. After moving to California, he became a pilot himself. Aviation is his other love that he describes as “an incredibly fulfilling activity”.

Laurent and I had an opportunity to discuss unified communications and the shifts he sees occurring in the industry.

DM: Your career has spanned many key transitions in voice, holding positions with multiple leaders in communications. What excites you today about unified communications?

LP: The rate of change and Innovation is much faster than ever before and still accelerating. In fact, a few years back, carriers, enterprise, and mobility were three different worlds, with little, if any, intersection. The convergence of communications and the ubiquitous availability of real time multimedia applications is a very interesting factor. It opens many new possibilities for enterprises and individuals to become more productive or to adapt their environment to their needs and preferences. We have seen nothing yet in terms of what the technology will do [i.e., compared with what it will do].

DM: No other UC vendor has embraced video to the degree that Cisco has. Cisco offers video IP phones, acquired Tandberg and Flip, and announced the Cius. Critics think Cisco is embracing video simply to consume more network bandwidth. Why is Cisco putting so much emphasis on video?

LP: It’s more than just network bandwidth. Video really is a game changer, it changes behavior and productivity. Adding rich video experiences such as TelePresence can actually help reduce costs by lessening the need for travel needed for face-to-face meetings and collaboration. There is no coming back when you start using video, and the high definition experiences now available–from Cisco IP phones to Cius to laptops to TelePresence rooms–allow for new collaboration patterns. In the end, Cisco is addressing its customer needs. Everyone from small and medium to large customers and partners has begun embracing video for communications both within and outside their firewalls.

DM: You had previously earned the nickname of a “Silo Buster”. Is that name still appropriate and why?LP: That was from my Contact Center days, but more than ever, integration and interoperability is important in the UC and collaboration context as well. How we bring together applications which used to be different and separate, how we allow any device to access and consume collaboration is crucial. Between 2006 and now we have integrated more things, making life easier for our users. We have propagated the Cisco UC client to several platforms including Windows, MacOS, iPhone, Nokia, Blackberry, and soon Android. We have brought UC to the web browser with plugins, and we have integrated to Quad–Cisco’s collaboration platform. We have harmonized our on premise and in the cloud presence offers, we have developed video interoperability, we have brought B2B interoperability to market, and more. We are breaking down the barriers between the fixed, mobile, and web worlds, between real time and non real time, between Cisco and other industry players. Interoperability is at the core of our strategy–any device, any time, anywhere.DM: Cisco’s cloud play seems to be WaaS (WebEx as a Service) which is more SaaS-like than ever before. How do you see the Cloud changing enterprise communications?

LP: I believe that Cloud is becoming a serious option and that the issues which limited the Centrex adoption are gone, and that hosted communications–and collaboration–are going to be a high growth market. Especially in the SMB segment, there is a huge potential to develop an under-served market. Our field trials with some of the largest carriers are validating the demand and interest.

In addition, some enterprises will choose to add cloud deployments to complement their on-premise infrastructure in locations where they do not have physical IT infrastructure (e.g. geographically dispersed offices) or as a way to provide a dynamic ability to add new users quickly (such as contract workers) or temporarily (such as a partner). The ability to deploy models flexible enough to accommodate several scenarios will be essential in the next years.

Our view on Cloud is to continue to expand the scope of our offer, conferencing with Webex, but also unified communications including telephony, voice messaging, presence, instant messaging, contact center as part of the Hosted Collaboration Solution.

DM: Now that Cisco and Avaya are getting into Android, can we conclude the industry will be embracing Android-based desktop wired endpoints?

LP: Android is certainly emerging as an interesting platform, and it is obviously getting a lot of traction. We are going to see more Android devices from Cisco and evidently others–which is not to say that everything from now on will be Android.

Avaya announcing an Android device validates our approach and that there is a market for enterprise wireless devices. Tablets are a compelling device and should be incorporated into a communications strategy. What matters are lightweight devices which can provide all the rich multimedia capabilities that enterprise users need. The reception we received on the Cius has been nothing short of exceptional. It shows that there is an opportunity to think beyond traditional worker productivity tools and look at UC-enabling endpoints that meet new enterprise needs.

DM:The Cius will be Cisco’s first 3G device. How can an enterprise CPE maker effectively compete with international wireless device brands such as Apple, RIM, Samsung, and Nokia in such a turbulent and mass production marketplace?

LP: Great question. As regards the 3G aspect, it is important to note that we use only the data channel and not the voice channel, so the Cius is not a mobile phone in the traditional definition. The Cius works with Communications Manager, can be used with TelePresence, provides virtualization and takes into account enterprise requirements for security and applications. This is different from a consumer play, and there is no other device quite like the Cius. In other words, the Cius is not a mass market mobile phone, it is in a new and different category.

LP:From a UC point of view we are targeting the enterprise, small to large. However, the enterprise and consumer side of the employee are blurring. This is one reason we used Android for the Cius; its extensibility allows users to load applications from the Android marketplace subject to enterprise policies. A keyword here is federation; we do provide federation capabilities with consumer services, for example based on the XMPP protocol for presence, and this allows our instant messaging clients to present buddy list s, including contacts from within and outside the enterprise.

DM: With the Avaya Nortel acquisition behind us, is the competitive landscape becoming more stable?

LP: Industry consolidation is going to continue, not just in UC, but in IT in general. It was inevitable to see major players combining. However it is just one aspect of the competitive landscape and I do not think that competition is going to be less vigorous; in addition to consolidation, new players are declaring their ambitions in UC, and as I mentioned earlier technology innovation is rapid. All I can say is that it will be interesting, but we intend to maintain and grow our leadership position, and we invest to this end.

DM: Is Cisco serious about virtualization regarding its UC portfolio?

LP: We have certified our implementation of our UC applications on the Cisco Unified Computing System running VMWare with Release 8 launched earlier this year. The virtualized applications include call control, messaging, and contact center. Our hosted solutions announced in June are based on this virtualization technology. A number of our customers are using virtualized desktops, we now also support many of our desktop features with Citrix, including Click to Call and phone control. So, yes, we are looking at virtualization very seriously.

LP: We have been in discussions, but we have a few concerns with the UCIF structure. We do believe that interoperability is very important and agree with the intent of the UCIF. We have made some requests to amend the bylaws and we will see where that goes.