Included in the “Collaboration Reimagined” keynote at Cisco Live last week were two previews of what’s in Cisco’s innovation labs. The first one was a one-touch join button for audio conferences, both in apps and on the phones themselves. It looks to be nicely implemented, and it will correct a competitive deficiency.

The second preview was a new digital assistant, currently named Monica. Digital assistants have moved into the mainstream, with popular offers including Apple Siri, Microsoft Cortana, Google Now, and Amazon Alexa (see related post). Each service is a bit different but follows a similar model: a local device for mic and speaker, and a powerful back-end cloud to interpret and process requests.

Cisco does not believe that the world needs another personal digital assistant, and so Monica is intended as a work, or team-oriented, collaboration assistant. Monica isn’t for shopping lists or reminders, but rather, to improve team productivity.

Speech has only become reasonable as a user interface (UI) in the past decade. Even now, it’s limited and typically requires a nearby microphone. The break-through with Amazon’s successful Echo device was its miniature seven-mic array that enabled room-based or far-field communications.

Cisco realized that it can also do far-field communications with its installed base of telepresence rooms, which are already equipped with microphone arrays. The WebEx and Spark clouds are already in place, so the only thing missing, until now, was the AI. Cisco is evaluating several AI services to power Monica, and will likely also consider IBM’s Watson, given its announced partnership a few weeks back (see “Cisco, IBM Team to Bring Intelligence to Enterprise Collaboration“). 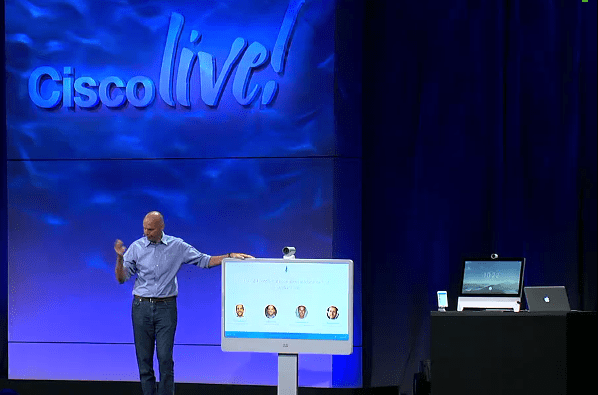 Jens Meggers, SVP and GM for the Cloud Collaboration Technology Group at Cisco, previewed Monica on stage, demonstrating how Monica could search for an expert by subject matter, call the expert, and add a follow-up item to that expert’s tasks. Most of that could be done with Siri or Google Now on Tap if Spark provides access (APIs). However, there are a variety of tasks associated with conferencing where any (artificial or natural) intelligence is helpful. For example, if a key participant is missing from the meeting, the first part of the meeting involves searching and dialing. “Monica, please find Jim” has potential.

“Monica, can you take (searchable) notes? Monica, can you (passively) take attendance?” Monica’s potential lies in being savvy with directories, Spark, and providing general collaborative assistance. For example, during a conference Monica could be asked to take action items or schedule a follow-up meeting.

Monica’s real power may lie less in automation and more in driving positive behaviors. For example, getting meetings to start on time by making late arrivals more visible and inquiring with colleagues about the whereabouts of late participants.

With proximity detection, facial recognition, and speech recognition, Monica may know who is speaking, and could potentially provide measurements on group participation. There’s been some fascinating research about collaboration that correlates effective groups with near equal participation in meetings.

Perhaps the hardest thing we do related to meetings is finding times to meet. A big chunk of a real assistant’s time goes toward scheduling, and rescheduling meetings. Most office tools suggest meeting times based on free availability rather than priority. Managing calendars could be a big work-related AI opportunity that’s beyond the scope of a personal digital assistant.

The more I think about it, the group assistant really falls into unchartered territory. Should Monica be able to rearrange calendars or assign tasks without individual user permissions? I can see both sides. There’s work to do here, but ultimately the idea of work-related, shared assistant could prove to be useful.

Although politically incorrect, I think the idea of a digital collaboration assistant has legs.

Cisco provided few details on what Monica will do, when it will become available, and what its released product name will be. The product name “Monica” is unlikely to survive. It is a clearly distinguishable trigger sound that I’m sure has been good for testing, but so popular that false triggers will be problematic.

Dave Michels is a Contributing Editor and Analyst at TalkingPointz.