Cisco Has a Secret

Cisco has a secret it can’t wait to tell. It won’t be much longer though – the cat comes out of the bag in a few weeks on January 24th.

But, the writing is on the wall.

That’s because Cisco employees and executives, even the @WebEx account are tweeting clues:

If you go to the URL, which will presumably be active for only a few more weeks, you will see a landing page with multiple inked lines and a what appears to be a Cisco Spark branded stylus. 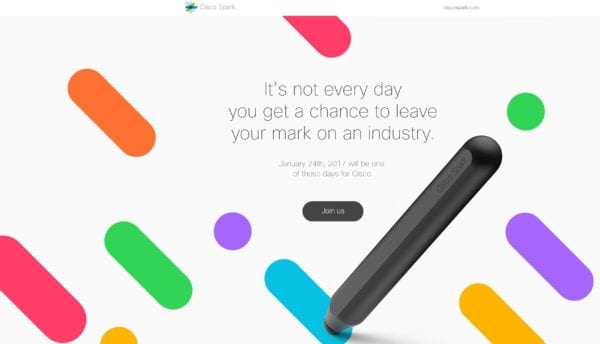 Cisco even sent out a stylus or two – though not to me. Evidently, Matt Grech at GetVoiP.com got one in a package that “included as what I presume to be a pretty large touch screen stylus – this isn’t meant for your everyday iPhone games. The stylus is the size and shape of which resembles a dry-erase board marker, adorned with a soft tip designed to gracefully interact with a touch screen.” Though Matt isn’t sure what the stylus goes to, he believes it is too big for a smartphone.

A whiteboard is not a ridiculous guess. Why? Because it’s the new, new-thing in video. Microsoft has its Surface Hubs (which evolved from the prior gen of Lync Room Systems (LRS)), Zoom has Zoom Room Touchscreens, and Google has the Jamboard.

The whiteboard was left behind when web and video conferencing finally figured out how to share e-content to remote participants. It’s about time that the video companies discovered the other (and first) collaboration device in the room.

This might even be big. Cisco doesn’t release new video hardware very often. We have to go back to December 2014 and the IX5000 for anything significant. At the 2014 Collaboration Summit, Cisco unveiled its new IX5000 and Cisco Spark. Both being products of the Trollope Administration. Since he arrived, Rowan has been harping about user experience and small details. A big part of the IX5000 was the part you aren’t even supposed to notice – the back of the unit. Cisco called it “the second front.” Cisco’s new attention to detail is to extend beyond the obvious – Telepresence meets Scandinavian design (again).

In addition to the “Second Front,” the IX5000 also sported a universal connector to eliminate dongles and a “whiteboard mode.”  SVP Cisco Collaboration Jens Meggers recently tweeted “One of these days we’ll have dongle-less meeting rooms… maybe Jan 24th.”

“Whiteboard mode” leveraged the 4k video camera with a 1k video stream so it could perform ‘lossless’ image processing pre-transmission. Ideally a room’s whiteboard is mounted directly in front of a camera but that’s often impractical. An indirect angle distorts the board, so Cisco developed de-skewing capabilities as what now appears to have been an interim solution. De-skewing a whiteboard skews everything else, so whiteboard mode zoomed-in on the de-skewed board. It wasn’t a bad approach, but the whiteboard remained an analog device in an otherwise digital environment.

Video room systems are maturing. We know how to set them up, and there’s been great progress in making them more accessible in terms of price and simplicity. However, e-whiteboards are a relatively new category. We don’t have enough experience with these yet to know what features we really want. Here’s my starter list of topics to consider:

These are some of the questions I will be asking Cisco – assuming they announce a board. Though I can’t say I yet know the desired best answers.