These are the books completed in September – a good month.

Still Foolin’ ‘Em by Billy Crystal: There are not much television shows I remember from high school, but Soap is one of them. What no one could know back then was that was the start of a long successful career for Billy Crystal. I read a lot of auto-biographies by comedians: Steve Martin, Martin Short, Tina Fey, Sarah Silverman, Bob Newhart. . . .   That there was name dropping, and that’s a common theme in comedy books as is Johnny Carson and SNL. But Crystal talked about real relationships, especially Mohammed Ali and Mickey Mantle. Billy has a very sincere way of telling his stories as w as the case with City Slickers, When Harry Met Sally,  and 700 Sundays.  It was an enjoyable read and I’m happy to report that I laughed out loud at least once.

I picked up at Costco the Complete Collection of Soap on DVD. I am half way thru season 2 (season 1 had 24 episodes). I am really enjoying the show. I remember parts from back in high school. It’s a very clever show that offers some great comedy inter-mixed with some very serious topics. 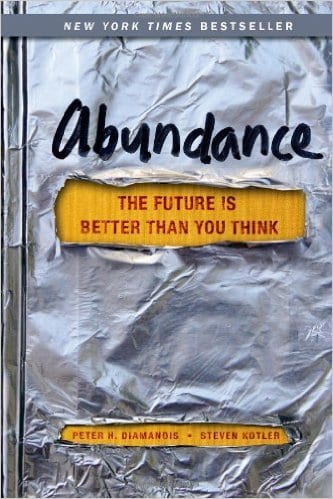 Forbidden Knowledge by Stephen Donaldson: This is the second book (of five) in the Gap Series. I read the first (The Real Story) in July. The series is highly regarded, and admittedly it’s reasonably well written, but not much happens other than rape. So far there’s three major characters. Book one focused on two in an oppressive relationship. Book 2 focuses on a different pairing and a different oppressive relationship. The end of book 2 sets us up with more characters. Book 3 has better reviews. . .

Abundance by Peter H. Diamandis:  I was hesitant to read this book. I have a lot of concerns about the the future of the human race and the planet, so a book with the subtitle “The Future is Better Than you Think” seemed incompatible with my world view. I’m happy to say I did really enjoy this book. It was one of my favorite books for some time.

The cover has a drawing of aluminum foil – a material that went from the most valuable of the precious metals to a disposable container. The raw materials didn’t change, but the knowledge and process to forge it did. Know-how, or more specifically technology, unlocks shortages. That’s a good thing because the planet is getting very crowded.

Abundance explains how we are on the brink of solving a lot of huge problems including energy, food, water, and education. This is the fourth recent book I’ve read that revisits Moore’s Law – its implications are widespread and far more significant than I think many realize. “Abundance is a global vision built on the backbone of exponential change, but our local and linear brains are blind to the possibilities.” While the book is overall optimistic, it’s also very educational and indeed balanced. Highly recommended.