Continuing with my second monthly installment of books I recently completed.

Future Crimes: Inside the Digital Underground and the Battle for Our Connected World: I really enjoyed this book and it was a real eye opener. I consider myself fairly abreast of what”s occurring in tech, including all the major hacks, Snowden, and phishing scams. However, I’ve never really looked at this stuff from a crime POV. The fact is we are more connected than ever before, and just as we have more ways to communicate there are also more ways to eavesdrop. Everything is online including our identifies, investments, thermostats, and cars. We kind of know that nothing online seems to be completely secure – put these together and it gets dark very quickly. Though this isn’t a fear mongering book. It is educational and oddly entertaining. Each chapter basically makes some claim that seems unlikely, and then the author backs it up. Usually with real crime cases. I highly recommend this book – it will change your perspective on many aspects of our modern life from Facebook to genetics. 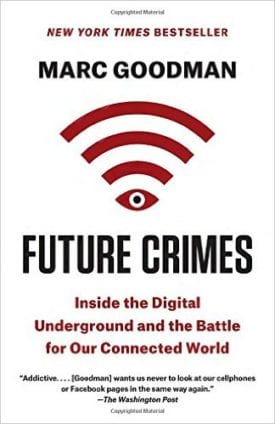 Snow Crash: This is a famous book that has inspired many, but not me. I started this book in the 90s when it was newer. It’s come up so many times that I decided to start it again and finish it this time, but it was hard. The science fiction parts were pretty good, but the story itself could not hold my attention. It falls into the tech-runs-everything in the future genre, and it appears to be on track in those regards. There are better stories in this category such as Daemon. Though I did like the common observations of a computer virus, superstition, and religion. I will forever now refer to a minivan as a Bimbo box.  I feel bad because Sergey Brin says this was one of two books that highly influenced him (I read ‘Surely You’re Joking, Mr. Feynman!’ by Richard P. Feynman last year and liked it). The book was probably more wow in the 90s. I’m sure some of the concepts , such as private corporate/governments, were more out there than they are today. Also, I do seem to be preferring non-fiction these days.

Stuff Matters: Exploring the Marvelous Materials That Shape Our Man-Made World: It doesn’t sound very interesting, but it was recommended by my friend Bill Gates. This is a great read about materials that you probably haven’t though much about. For example, I didn’t realize how long it took for us to master steel – centuries. Excalibur makes more sense now because a strong sword wasn’t so common. Most swords were brittle and easily broke. It was the Samurai that figured out strong steel. Cement is a bit of an unsung hero. It’s man-shaped stone with hundreds of uses. It was a gardener that figured out reinforced steel because no man of science was stupid enough to put steel inside cement. The author offers the layman a glimpse into the world of materials (and chemistry), and it’s amazing. Dental implants, carbon and graphene,  diamonds, and more. Lots of thought provoking tidbits. The invention of stainless steel created the first generation that didn’t taste their serving utensils. Highly recommended.