Homeland by Cory Doctrow. Homeland is the sequel to Little Brother which I read before posting reviews. Doctrow is a well-known champion of liberalizing copyright laws (you won’t find his books on Audible). Little Brother and Homeland are works of fiction that happen to provide some excellent education on surveillance technologies. The books are a bit juvenile, but I’ve recommended them several times to very smart people that want more exposure to this tech. In Little Brother, for example, the high school video security system utilizes gait recognition. This tech is real. The kids outwit it though by putting rocks in their shoes — clever. 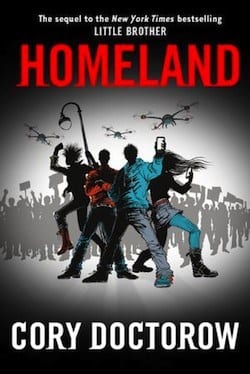 In the first book, our high school protagonist gets caught-up in a terrorist attack. Even though he’s innocent, the Feds are after him. Once he realizes he’s being monitored, he has to outsmart the NSA to save the day. He also has to outwit his parents and teachers. That’s a lot to outsmart, but fortunately he’s very tech savvy, and every step is carefully explained.

Homeland picks up a few years after Little Brother. Something big happens again, and luckily our tech hero is experienced. From a plot perspective, the stories are a bit too similar, but the tech is mostly different. Little Brother is the better book. Both have strong themes of questioning authority, don’t trust anyone, and tech is the key to personal and social empowerment. This are rise-up books.

What is nice about these two books is they can be recommended to younger readers that may want to learn some tech. Older folks may have difficulty connecting with the young characters, but can learn a lot. You may have the compulsive desire to put your smartphone in the fridge while reading.

The Last Good Man by Linda Nagata is military contractor techno-thriller. Yes, mercenaries. It seems like a routine mission, rescue a kidnap victim in foreign land because the US won’t negotiate with terrorists. What attracted me to this book was the tech of the near-future, cybernetically-enhanced soldier. Most of the tech seemed plausible today. It was eye-opening because there so many non-obvious yet practical military applications of the tech around us such as drones and 3D printers.

The story itself was ok, but the tech was great. VR headsets, haptic glove controlled devices, and drones (or bots) that mimic birds, insects, and animals. One device was a small camera that they put in the car’s back-window that determines if you are being followed. It’s a reasonable application of pattern recognition and AI which seems very likely to exist. Some of the insect bots felt like science-fiction mostly due to current battery limitations. They can crawl into locations to “see” with their cameras or up into a parked car to disable it. Consumer tech is not the same as government tech, so it’s hard to know which of these items were science fiction.

When I was young, the spies in the field were on their own – think Mission Impossible. But today, shows like Criminal Minds and NCIS have major tech characters that stay behind in the lab to support the field agents. It hadn’t occurred to me how significant of a change this is. All these drones, bots, and comms require dedicated back-office support. More and more entire missions are being completed solely by the back-office.

One character preferred to work alone, accompanied by just his bots. He likes them because they don’t second guess kill orders like some human operatives do.