April was a great month for books- after a grueling first quarter of travel, April was a full month at home. Three great books plus a mental floss thriller.

I continue to prioritize science fiction. It’s unbelievable how good science fiction has become. Older science FICTION, like Starship Troopers, has more emphasis on the fiction part. Basically, they are fictional novels that have some sort of technical element. It crosses over with fantasy books (is a phaser or tricorder that much different than a wand?). The newer books are SCIENCE fiction. They take some liberties, but are grounded in reality. The Martian and (last month’s) Seveneves are fictional novels that aren’t too far from the possible – possible in a quantum reality but that’s another book.

The classic Starship novel involves a military that fights aliens rather than humans.  It involves made-up wars on made-up planets against made-up aliens using made-up weapons. The newer Martian novel involves human travel to Mars – something we have yet to accomplish for real. However, we do have a pretty good idea of what’s there and what it will take to make the round-trip journey.  The book is about what might happen within the bounds of known science. 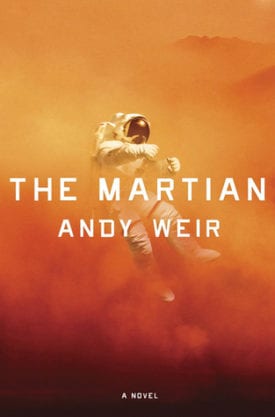 The Martian by Andy Weir is a delightful book. I wanted to read it before I saw the movie. I saw the movie and liked it, so (temporarily) lost interest in the book because it is rare that both movie and book are good – especially this good. Of course, there are significant differences between the two versions, but the screenplay did a great job of hiding the gaps. I recommend both, and I don’t think it even matters which you do first. The science is just the right level to make it all make sense without being overly complex. I feel smarter and I was entertained the whole time.

Starship Troopers by Robert A. Heinlein. I’ve always liked this movie which is similar but different. The movie focuses more on the war and the book more on the military. The book didn’t have any super models or shower scenes. The women and the Doogie Howser character (Carl) are minor characters in the book. Troopers also spawned a television series known as the Roughnecks. Starship Troopers is considered one of Heinlein’s best books. I’ve only read two, but I think I preferred Stranger in Strange Land primary because of the Jubal Harshaw character. Starship Troopers is really the story of a pretty boy’s decision of the military over Harvard. Not just any military, but the baddest Mobile Infantry (MI). It’s his journey through training and war. The MI are the fighting division of the military — not just button pushers. Reminded me of someone in knew in high school that wanted to join the Marines – “not the Navy, because they are pussies.” Starship captures that kind of pride and commitment to fighting and dying with honor.

The Road by Cormac McCarthy. In a word: Dark. I think dystopian future is a genre itself. This one has the unusual twist of being a father-son journey of survival in a hostile world. People can’t be trusted, food is scarce, and survival requires effort and cunning. That doesn’t relieve the father of his parenting obligations. It is a thought provoking book, but it’s depressing. Let me emphasize that – be careful about when you might jump into this one as it does affect mood and outlook. I am not in a social book club, but if I were this would be a good recommendation. That way discussions can double as group therapy sessions. I’m not sure why this is so dark- there’s not much violence and the father-son relationship is nice. I guess it is the idea of raising a kid in these conditions. Other great dystopian novels include 1984 and the Handmaiden’s Tale — neither of which are as dark.

Bonus: Cormac is involved in the Santa Fe Institute — an organization that searches for order “in the complexity of evolving worlds.” He published this month an essay on language called “The Kekulé Problem.” You can read it here:
http://nautil.us/issue/47/consciousness/the-kekul-problem

Pretty Girls by Karin Slaughter is a mental-floss thriller. Two estranged sisters that thought they had nothing in common share more than they ever dreamed possible. I thought I had it all worked out, but that was around the half way point (I was wrong). This book is a bit horrific, and just about every character is possibly in on it. It would be a good book to adapt to a movie because I wanted to cut out scenes myself. Not because they are dull, but because it just seemed longer than it needed to be. A reasonable read nonetheless.