I’ve always thought T-Mobile’s Legere was super smart. I don’t necessarily mean in IQ, but he is street smart.

If he is as smart as I think, he is going to gore Verizon and AT&T. Here’s how it will play out.

Let’s start by looking at the current bandwidth holdings of the carriers:

It’s notable that AT&T has the biggest holdings and T-Mobile has the least. Even worse, T-Mobile has a lot of crappy High Band spectrum which is fast, but has limited range.

So you would correctly conclude that T-Mobile is kinda doomed in rural areas but should end up with a. Faster network in metro areas than, say, Verizon.

Now it gets interesting…

T-Mobile has a value of $56 Billion. They have a bid in to purchase Sprint, which has a market cap of $23 Billion. Together they would have a value of $80 Billion or so. With a slight premium to entice Sprint to do a deal call it an $85 Billion package +/-.

Dish Network is sitting on a backload of bandwidth that they have purchased at various auctions. And, most of it is “prime real-estate” in the 2 Ghz range. How big is it? It’s as much as AT&T has, or as much as T-Mobile’s and Sprint’s combined. That’s a lot. The estimated value of this bandwidth is about $15 Billion.

So let’s assume that crazy as a fox Legere offers dish a tasty $25 Billion for the spectrum just because, well, it still makes sense. (The value of Dish is about $13 Billion, and that includes not only the spectrum but also their broadcasting business.)

So the T-Mobile + Sprint + Dish combination would come to less than half the value of AT&T or Verizon. I think it would be pretty hard for regulators to argue that T-Mobile has become too big. 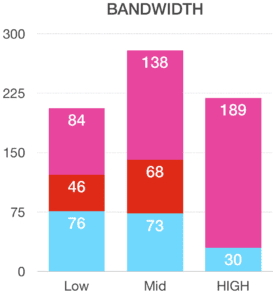 Which carrier would you rather be?

You are right, if T-Mobile can merge with Sprint then pay a King’s Ransom to Dish, they will walk away as the bandwidth leader in every category.

So how do they get there?

If T-mobile does a deal with Dish too early, AT&T and Verizon will whine to the regulators that T-Mobile has too much bandwidth and may convince the regulators to make T-mobile sell off some. This is likely since the FCC’s Chair, Ajit Pai, seems to be completely owned by Verizon and to some extent by AT&T.

So T-Mobile must get through the Sprint Merger. This should be allowed since 1+0=1 (Sprint is the “zero” in this equation.) Sprint has no hope of being an anything in this game.

Once T-Mobile merges with Sprint they then merge with Dish. AT&T has already set this up to happen, inadvertently. Since AT&T acquired Direct TV, T-Mobile can claim they need Dish to compete against Direct TV. But the truth is that T-Mobile needs the bandwidth.

Now, if T-Mobile can merge with Sprint and then acquire or merge with Dish they can throw the satellite business in the trash can (or sell it off after a polite period). But look at what they end up with.

T-mobile could become the bandwidth leader in the US. In every category: Low, Mid and High.

I will argue that it is game over. T-Mobile becomes the industry leader. This is because it’s all a matter of bandwidth.

I don’t know. But Legere is crazy street smart. He MUST have thought this through. He MUST be impatiently awaiting the Sprint go-ahead so that he can pounce on Dish.

And, will Dish bite? I think so. They are doing absolutely nothing with their spectrum. They are doing so much of nothing that they are getting in trouble for not using the bandwidth. It is become such a severe problem that Dish is having to cobble together a $1 Billion fake IOT (“Internet of Things”) strategy. That is, Dish is putting together a fake IOT network solely for the purpose of appearing that they actually have some use for the bandwidth. And, their IOT strategy will be long and drawn out and will lack specificity because it is, well, fake. They are just trying to not lose their bandwidth until they can sell it to T-Mobile which they cannot do until the Sprint deal goes through.

Oh, the agony of waiting to see this unfold.