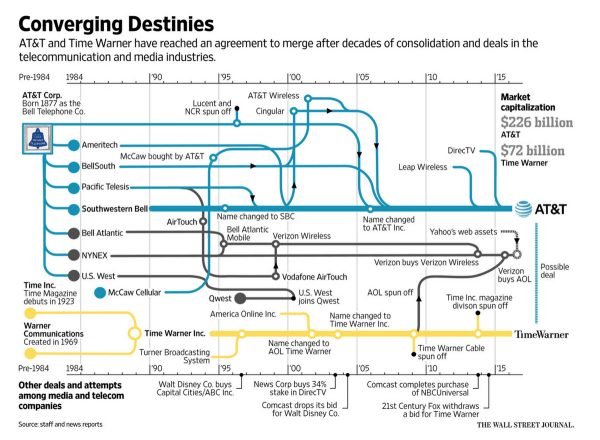 What this diagram says to me is that AT&T got it completely wrong in the way they divested themselves in 1983. The fact that it smashed apart and then all came back together is evidence of that.

It is important to remember this…

The anti-trust lawsuit against the Bell System in 1975~1983 was solely to divest Western Electric (manufacturing division) from AT&T. That was the only request of the Department of Justice.

Had that been done—solely divesting Western Electric—AT&T would have had less chaos and wouldn’t have gone through all of these divestitures and re-acquisitions.

There was a secondary reason for this: Western Electric was a very severe but very major supplier of military hardware. It was Western Electric that owned and operated all of the facilities that designed and built nuclear bombs, biological warfare systems, and the NASA space program’s communications systems. Many (most) Western Electric executives were double-dipping retired military brass. And, the dirty little secret was that these military programs were largely being funded by overpriced telephone gear as Western Electric was bilking the local phone companies who had monopoly power to charge whatever they wanted.

Because of the military control over Western Electric, divestiture happened the way it did.

Ironically, notice that the new AT&T does not own any manufacturing capability. Yes, owning Western Electric was a boondoggle that pulled AT&T to the point of bankruptcy a couple of decades ago.