Avaya Has a New Stadium

During the weekend, the San Jose Earthquakes held a ribbon cutting ceremony for its new stadium. The team also hosted its first game in the venue.  a preseason game against the Los Angeles Galaxy. More significantly, it was also the soft-launch of a new marketing approach for Avaya that is so crazy, it just might work.

Telecom professionals are deprived of sponsorships of mass-market events. You never see a UC related commercial during the Super Bowl or (until now) games played at a venue named for a UC vendor.

The stadium opening is not far from or long after the opening of Levi’s stadium, home of the 49ers. Avaya stadium is much smaller, but might actually have more cachet. Soccer is hip, and suddenly the cool are saying “check out Avaya.” Although they may be referring to the Quakes or the stadium for now, it’s a powerful start.

The reason IT infrastructure firms don’t normally sponsor sports venues is because of all the fans in attendance, very few are likely to be decision-making prospects. Nor, do the majority of attendees have much of an opinion on infrastructure at all. Marketing dollars are better spent elsewhere – at least that was the old logic.

Avaya has a new theory, that end users are the new IT decision makers. We generally refer to this phenomenon as consumerism, and it’s been a powerful force. For the past five years enterprise vendors have been trying to become more consumer friendly. That typically meant making their applications iPhone ready. Avaya is taking it a step further and effectively turning this major league venue into a demo center.

The move to sponsorships comes from CMO Andy Cunningham, who was retained by Avaya last year.

Avaya is not new to sponsorships. It was a major sponsor for the Winter Olympics in 2010 and 2014. There are hints that Avaya equipment was also in play at the recent Super Bowl, but Avaya won’t actually confirm or deny this.

BONUS: See me holding a retired Olympic Torch in a retired Avaya building.

I should clarify sponsorships like this are not a sales strategy, but a marketing strategy. I previously wrote about ShoreTel’s vertical in sports here. NEC also has strong focus on stadiums outside the US which goes beyond voice with biometrics, drones, LAN/WAN, and SDN. NEC was recently named a Gold Partner for the 2020 Olympics in Tokyo.

Cunningham’s sponsorship strategy is marketing to the stadium’s attendees. It’s a broader strategy that includes many venues. Avaya is also working non-naming sponsorship deals with Pepsi Center (Denver), Bell Centre (Montreal), Rogers Arena (Vancouver), Zero1, and the SFJazz. A new website for sponsorships can be seen here. Zero1, SFJazz, and the Earthquakes count as double wins because Cunningham is also turning her focus to the Silicon Valley market.

Avaya is very excited about its new Stadium. The initial press release was in November. It came up prominently at the Avaya Engages event in December and then again at the Avaya Partnership conference in January. In February Kevin Kennedy brought it up in the company’s quarterly financial results call.

Part of this excitement comes from the fact that sponsorship is not just about money, but technological as well. Here again Avaya is updating the rule book. Rather than just provide customers with technology that they can leverage, Avaya is providing customized applications to help the Earthquakes engage with its fans.

I spoke with Andy Steen who is heavily involved with these sponsorships. Steen and Cunningham have worked together for years, and Steen appears to be taking the lead on the sponsorship program. She indicated that Avaya intends to take these applications to other sponsored venues. The goal is more than fan engagement. Avaya has very specific objectives associated with its sponsorship program, including:

Avaya wants futbol fans to directly benefit from its technology and to bring that experience back to the office: “why doesn’t our office have technology like Avaya?” It will do this by marketing to the public instead of just to IT. Consumerization is about users pulling tech into the workplace, and that requires direct exposure.

To personally engage with fans, Avaya is humanizing its Ava character. Ava is a fictional character that is an Engagement Expert which carries elements of both a brand ambassador and mascot. In cartoons and videos she promotes best practices for effective communications. Avaya Stadium will provide Ava a stage for live interaction. A character like Ava is a hard thing to pull off. Though I haven’t see her live yet, I do like her work in her videos. 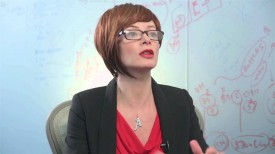 Avaya stadium is highly visible at the heavily trafficked intersections of Interstate-880, Highway 87, and Coleman Ave at San Jose International airport. Avaya bought 10 year naming rights for the stadium for about $20 million over 10 years, a relative bargain to the less visible Levi’s stadium which cost the clothing company $220 million over 11 years.

The big question remains: Does it make sense to market UC to the general public? We probably won’t know for a while, but the Silicon Valley area, major league soccer, and a highly visible landmark seems like ideal test conditions. My guess is it will, and it could change UC marketing across the industry.

The season opener is on March 22 against the Chicago Fire (sold out). The venue will be used for other events as well including the U.S. women’s World Cup match against Ireland.