I got to carry the Olympic torch! It wasn’t lit, and I didn’t get to take it anywhere. Avaya is the Official Supplier of Network Equipment to the Sochi Winter Games.  It brought one of the actual Olympic torches used during the torch relay to its Westminster office in Colorado. I just happened to be in the area and needed a light.

What an incredible technical challenge to power the Olympics (evidently the Olympics are a big deal for the athletes too). For some reason, they always host the winter Olympics in remote mountain villages. Some 75,000 people are expected each day – that’s like a SuperBowl every day for over a week, but scattered among  two “clusters” (mountain and coastal). The television audience is estimated to be over 3 billion –  including 30 Internet TV channels.

It’s a lot of infrastructure and pressure. Avaya did the first all IP olympics four years ago. This is how Avaya intends to do this time:

Network: Sochi will be the first “Fabric Enabled” Olympic games leveraging Avaya’s VENA Fabric Connect technology. This will be a showcase event for Shortest Path Bridging (SPB) – the protocol Avaya is championing for enterprise SDNs. At Sochi, the technology team will be able to activate new services and adjust capacity dynamically as network traffic requires.

Avaya is also providing 802.11n Wi-Fi at the venues with its 8100 family (split plane architecture) of products.

Communications: Aura will be powering the voice and video communications in Sochi. Separate service classes are set up for different roles (media, athlete, staff) by device and user using the Avaya Identity Engine. Sochi is a BYOD supported event. 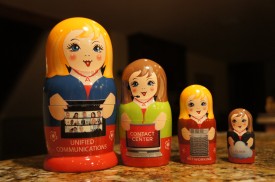