August was a banner month for completed books. The list appears long, but I think I read Coraline in July and forgot to include it in last month’s post, and several of these books are short. 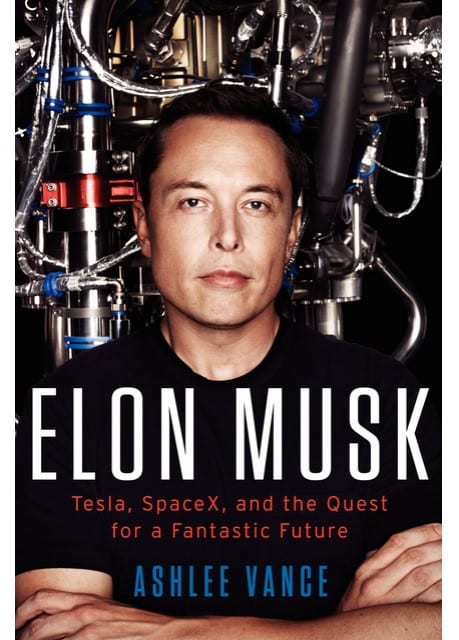 Elon Musk – Tesla, SpaceX, and the Quest for a Fantastic Future by Ashlee Vance. Last year I read the Steve Jobs book and even though I’m not an Apple dude I enjoyed reliving many of the events in the book. Jobs was an amazing visionary. So, I was hesitant to read this book because I didn’t know much about Musk. Now I’m pleased to say we are best friends. This is a great, highly recommended book. Musk and Jobs have many similarities, but it is truly humbling to realize how much Musk has accomplished. His success is much broader than just great products.

I knew Musk was associated with PayPal, but didn’t know he was fired from it. I knew Musk was associated with Tesla, but didn’t realize he wasn’t an original founder. I knew Space-X was launching re-usable rockets, but did no know its real mission is colonization of Mars. Musk thinks big and has successfully implemented Silicon Valley approaches in four entrenched industries (banking, automotive, space, and solar). Each should have gobbled him and his heretical ideas up. The opposite is happening. Musk set out to create the best electric car, and he somehow managed (according to Consumer Reports and Car and Driver) to create the best car.

There’s incredible resistance to change in general, and it can get very ugly when with powerful incumbents. This biography captures the drama and offers hints as to his motivation. Getting rich was really just a necessary step for him to deliver on his vision. After reading this I realize we are entering a third era of manufacturing. The first era was hardware, the second was software, and the third is the combined power of both. Jobs hit on this too, but it really comes out more clearly with Musk. Both Tesla and Space-X make all of their own parts and could not be successful otherwise. Musk thinks that a lot of what is wrong in the auto industry is its reliance on outsourced parts and an assembly rather than design mindset. I have newfound respect for Tesla cars.

Luckiest Girl Alive. After reading the Girl with the Dragon Tattoo series, Gone Girl, and Girl on the Train I came to the conclusion that I like girly books. About a third of the way into this book, I was questioning my theory – then it turned. This book as some surprising twists, and I enjoyed the ride. It’s not quite in the same league as the others mentioned, but not a bad read. I don’t want to reveal much, but will say that although the setting or drama is common I have not run across it as a plot device.

“The Snows of Kilimanjaro”  by Ernest Hemingway. Although available as a book, it can often be included within a collection of short stories. It’s an easy read and quite powerful. You can probably read it faster than sitting through a viewing of Citizen Kane which shares some similarities (Snowbud). The story still basically works today though Gangrene is not as dangerous as it once was. It is my first Hemingway story and he’s surprisingly readable.

Coraline by Neil Gaiman. I wanted to try a Gaiman book, but I fear this was the wrong one. It was basically a Twilight Zone episode or several of them with a bit of Roald Dahl mixed-in. A  girl named Coraline discovers that a locked door in her living room actually opens to a tunnel to Wonderland um or to another dimension where her other mother and other father live in her other house in a other world. At first Alice likes it and befriends a (Cheshire) cat, but soon realizes there is ‘no place like home.’ Might be a fun read if you have an eight year old, but there is little here for an adult.

Blade Runner by PKD. Continuing with my commitment to read more Sci-Fi. It’s back to the future with this classic 1968 novel that takes place in a post-apocalyptic San Francisco. The book was originally published under the title Do Androids Dream of Electric Sheep. I don’t understand how or why the movie The Blade Runner is related to this book or why PKD renamed the book after the movie which is loosely-at-best based on the book. The original title makes more sense.

It is the story of a bounty hunter that “retires” Nexus Androids. Ironically Google just announced it will retire the Nexus (brand) for Android phones. These robots are so real that the only way to distinguish them from humans is a verbal personality test.

The movie focuses on the bounty hunting, but the book’s best stuff is everything else. For example, few live animals still exist so they are highly coveted. Most people can only afford electric simulations (such as an electric sheep). Real status comes from owning a live animal. The protagonist inquires about rabbits at a pet store and the salesman attempts an upsell: “I’d like to see you move up to the goat class, where I think you belong.”

At almost 50 years old the book holds up well, but there are signs of wear. For example the hovercars are not self driving.

The Icarus Deception: How High Will You Fly? by Seth Godin. This short book is a call to action. Stop being a cog in the wheel and put yourself out there as an artist or creator. Fortunately that includes blogging, so he was preaching to the choir (at times). That said, this book is not for everyone. Consider reading it if you feel that your creativity is stifled and you want some inspiration to do something about it. Unfortunately most people can’t do much about such things. Quitting your job and becoming an artist just doesn’t work as general advice. However, Godin will push buttons and challenge the reader in many ways. Warning: it’s a very repetitive book that tends to repeat itself.