Today, the idea of routing traffic is no big deal. You dump the IP traffic into the internet and it comes out at the other end. The actual routing of packets can vary with each packet based on loading. Or, even if you are using switched circuits and an ESS it’s just a matter of lookup tables in a computer.

But how did they do sophisticated call routing from 1929 up until about 1980? It’s a crazy machine.

You have perhaps seen IBM punch cards, either in person if you are old or in pictures.

The Bell System had their own version. These cards were large steel sheets with larger holes than a normal card. The cards would be stored in a tank of light-grade oil. Each card had an extractor that would lift the card up above the other cards. On one end of the long tank would be a light source. On the other end would be a photocell for each punch position.

Thus, a card could be individually raised up, and then it could be optically read. Then, it would drop back down into the tank.

So let’s say you dialed “213” to call California. Card number “213” would be raised up and be read. This card would then be read. It could contain instructions such as: Primary route, Secondary route, Tertiary route, Class of Service, and toll billing group.

So you dial 213, the card is lifted up, and now your phone system knows the best and alternate way of routing calls. Best of all, this information is easily changed. So a call from Saint Louis might route directly to Los Angeles, alternately to Denver, and so on. But if Denver was receiving too much traffic, the Saint Louis system could be told to use a different route, such as Phoenix. It was as easy as punching a few new cards and putting them into the tanks!

The routing information put onto the cards came from orders from headquarters such as these: 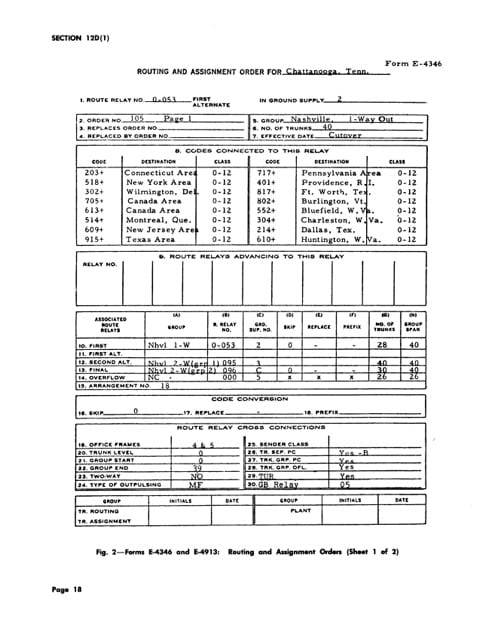