In my world of communications and technology, there are three orgasmic topics that are guaranteed to get attention:

So the obvious conclusion would be that a device that combined all three would be big news. With tons of speculation prior to the announcement, and even more after the announcement, with a flurry of conversation up to the release.

Last week, Avaya held a conference in New York to announce, among other things, its new tablet. Well, not really. Avaya did have the conference, and it did have a tablet, but it didn’t announce that. In fact, they made it clear the keyboard-less, slate-like, pad-like, Android based device was anything but a tablet. (More on this below).

I wasn’t at the conference. I was with people who had been pre-briefed and was told about Avaya’s new Communicator device. I was eager to learn more, and read over the coverage and the press release.
So, I thought the device was named a “Communicator”. Avaya already has a Communicator, the One-X-Communicator software client. I knew that, but I also know the industry loves the term Communicator. But I wasn’t alone with my confusion. In addition to several people I spoke with, I also read these articles:

We were all wrong. The actual name of the device is Avaya Desktop Video Device with Avaya Flare Experience, or ADVDwAFE for short. okay, I made up the abbreviation, but the name is legit. The press release is here, but it simply refers to it as the “Avaya Desktop Video Device” (ADVD). I mistakenly considered that a placeholder name, and not the real name. Reminds me of the movie Airplane: 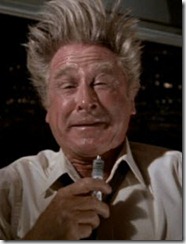 Rumack: You’d better tell the Captain we’ve got to land as soon as we can. This woman has to be gotten to a hospital.
Elaine Dickinson: A hospital? What is it?
Rumack: It’s a big building with patients, but that’s not important right now.

Avaya: We have to get this guy a tablet for a video conference.
Customer: A tablet? What is it?
Avaya: It’s a desktop video device with a Flare experience, but that’s not important right now.
Editor’s Note: I think I picked the wrong week to stop sniffing glue

In this week’s UCStrategies.com podcast, I poked fun at Avaya for using the name “Communicator”. You can hear/view that podcast here. @LawrenceofAvaya posted the following comment:

…Today the experience is being initially delivered on an Avaya optimized device which has the name: Avaya Desktop Video Device with Avaya Flare™ Experience. The new products do not use the word “communicator”, however Avaya has an existing PC Windows desktop client, Avaya One-X® Communicator, that was also updated as part of the announcement with SIP HD Video support…

I was wrong, and I apologize. Also, thank you Lawrence for the clarification.

Instead, I should have poked fun at Avaya for its launch. It’s a wonder how so much incredibly sexy news (both Flare and the non Tablet) could be turned into such a thud. There is actually some very interesting and exciting news buried within.
1) This is Avaya’s first 3G and first Android device. This is big news. That makes two (the largest two) CPE telephony makers embracing both 3G and Android. I’ve been predicting that Android should be headed to IP phones, and its finally happening. Also, with the current love affair of all things cellular, it is extremely interesting to see CPE maker’s embracing 3G. I do believe there is room. The consumerization of enterprise technology is a result of consumer devices being better. What will enterprise class, non consumer, 3G devices look like? We are starting to see and I think it is going to be interesting. I expect to see more 3G devices and more Android devices geared for the enterprise. (unrelated: see Telecomputers).

2) We are also seeing a mad rush for portable videoconferencing devices. I think it is important to note that there is no clear demand for this. However, we have seen Apple’s FaceTime, T-Mobile’s upcoming My Touch HD, the Cisco Cius, the new Apple Touch, The expected upcoming iPad, upcoming Motorola phones, RIM’s upcoming BlackPads, HP’s redesigned Slate with webOS, and other devices with front facing cameras… Evidently, the hardware makers have decided we want this.

3) Recurring theme emerging of the beginning of the end of proprietary devices (we will see). Though we are not there yet, I keep hearing and reading various versions of the same message. Consider this line from the ADVD release:

The Avaya Flare Experience is initially sold with the Avaya Desktop Video Device but will soon be made available for other environments, including PCs, laptops, tablet PCs, and smartphones.

This is a big change for Avaya (and many other firms) and reflects a change in endpoint design and capabilities. Traditionally, the only way to accomplish advanced features was proprietary signaling. SIP was supposed to fix that, but has yet to really get past call control. The emerging standards are IP based controls via XML and other protocols. This will make telephony a very different ball game over the next decade. It also means that mass production technologies and distribution channels could dramatically change the game. The death of the IP phone may be well exaggerated if we see huge price drops coupled with huge functionality increases.

4) Video Video Video. I am doomed, not being the most photogenic personality.
Video is becoming so pervasive (see Say Cheese) it is scary. Forget telecom, I am going to make a fortune on a new “YOU SEE/UC Diet”. Sticking to movies, consider “Singin’ in the Rain” where the Hollywood starlet gets ousted because of her awful voice during the transition to talkies. Or how about Broadcast News, where a pretty-boy anchor beats out the scholarly anchor as the network adapts to viewer preferences. Fiction? Maybe, maybe not. The popularity of video may have similar impacts to our voice and text based society.

5) The ADVD will use “significantly less” bandwidth than competing devices? How can this be? Particularly since I can’t find any details to back it up. Eric Krapf hit on this in a NoJitter piece with “Flare’s video client will use less bandwidth than other videoconferencing endpoints–600 kbps-700 kbps–and that the bandwidth requirement will fall even further in future releases, when Flare will incorporate Scalable Video Codec (SVC) technology.”

600 kbps-700 kbps for non-HD video is very reasonable. That bandwidth can even support HD for a basic talking head. The ADVD has a built in HD camera, but it isn’t clear if it supports HD video in its initial release. Based on the excerpt above, it does not support SVC, nor is there any mention of High Profile tools. The claim that is uses less bandwidth appears to be baseless.

Nor is there any information on interoperability. Can the ADVD be used directly with other video systems? As stated in 3 above, multi device support is inevitable, but that isn’t the same as using Avaya devices with other vendor solutions. I don’t know if Avaya is making the non-tablet itself or partnering with an OEM, but I don’t think Avaya has made video endpoints before. Its IP video phone is made by Tandberg, and it resells numerous Polycom products. It raises concern around interoperability, exacerbated by the fact Avaya is not a member of the UCIF (which prioritizes video interoperability). Flare may be this tablet’s only experience.

6) When is a tablet not a tablet? Avaya made it abundantly clear that the ADVD is not a tablet. And that raises the question, What is a tablet? Considering the only real tablet on the market today is the Apple iPad, the fair answer is to say it is an iPad or iPad like device. Can a single purpose device (say video) be a tablet? Is the Kindle a tablet? A Kindle is very different than an iPad, but they share several similarities. Microsoft’s Ballmer says iPads are PCs. I don’t know if the ADVD is technically a tablet or not, but I do know its going to be compared to one (just as Kindles, PCs, and smartphones are). And with a MSRP of $3750, I can see why Avaya prefers it be in a class by itself.

7) The final point to discuss is the price, MSRP of $3750 feels high. Perhaps it will feel better upon further exploration. There is no device quite like it, so how could it feel high? Because the iPad starts at $500 and that’s the primary reference point. There are two important factors why consumer tablets will be much less expensive, and one factor why enterprise tablets will be much more expensive.

This is an enterprise grade device with higher end components (such as HD camera) than found in consumer grade products. The device really can’t be compared to consumer grade mass produced items…. or can it? As stated in 3 above, the Flare experience is coming to consumer devices which cost much less.
Furthermore, the price just doesn’t jive. Avaya is using Android, supposedly with minimal OS development costs. The ADVD uses many standard components (USB, touch screen, wireless chipsets, camera, battery, etc.). I don’t know what an iPad costs to make, but there are no subsidies on the $500 model and its presumably profitable. Conversely, the iPad also has its own operating system. The perceived cost of the iPad is also lower because it can do so many things (cost per function), but the ADVD is positioned as a video device only. Sorry, but the price still doesn’t feel right.

So that’s my revised take on the ADVDwAFE. An interesting device that has some potential, some questions, and some flags. It has all the key components to be a very sexy and lucrative device. I am pleased to see enterprise class hardware becoming available as an alternative to the onslaught of the consumerization of IT. However, there is a lot to learn from these consumer devices – including marketing and product launching.