Last year Polycom introduced a technology it calls “Acoustic Fence” on its Group Series video solution. The technology utilizes cameras and a microphone array to create a targeted or “fenced” zone. It can reduce the noise that comes from outside the area, or mute the microphone when there is no sound within the zone.

Acoustic Fence is a clever concept and a clever name. 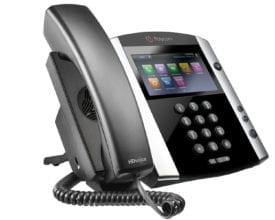 Active electronic noise filtering is an old technology. Bose is best known for applying it to headphones, and Polycom very successfully applied it to the speaker saucer decades ago. The tech now works with Polycom handsets.

Active noise filtering requires some logic to separate desirable sounds from noise. This is usually accomplished with multiple microphones and an algorithm to recognize the speaker. My tiny Plantronics mobile headset has two microphones: one by the mouth and one facing outward on the boom. Speaker saucers have multiple mics and use volume levels and other patterns to determine the speaker (also known as beamforming).

Once the background sounds are determined an inverted signal (antiphase) can be generated to cancel out the noise. Anti-noise or “destructive interference” will reduce noise. Because there’s a slight lag in the process it works best with constant noise like jet engines. What Polycom did on the VVX Phone is use the speakerphone’s microphone to determine the background while the person speaks into the handset.

Kind of unrelated it seems that we keep finding that our old habits of turning things off was just silly. I rarely turn off my desktop any more. Amazon’s Echo device is always listening, and my mobile is always monitoring for  “OK Google.” I was in a conversation just two weeks ago with a vendor that has an application to keep the video camera on a phone all the time – even when not in a call.

Polycom’s approach is pretty clever, and I’m surprised it took until 2015 for someone to do this (or at least for someone to bring it to my attention). I had an effective demo of this “acoustic fence” on a trade-show floor, though I haven’t tried it yet in an office environment. The feature was introduced in VVX software 5.3. My phone is on 4.0.4, so I now have a reason to upgrade.

Polycom is very innovative in phones right now. They have the benefit of supplying (and being pushed by) several highly innovative platforms including SfB, 8×8, Thinking Phones, BroadSoft, Genband, MetaSwitch, and RingCentral (the short list).

As much as I like the “acoustic fence” on the VVX phones, I don’t like that they are using the same term across noise filtering technologies. I am guessing they thought that voice and video are different enough that they could leverage the same trademark across solutions. The fence term applies better to video. The VVX implementation doesn’t really have a fence or zone. Audio/video distinctions are also confusing because some VVX phones have video cameras and the new Trio can do audio or video. One term for both approaches just creates confusion. Too bad the noise filtering doesn’t block out the marketing.