Apple has Evidently Lost It

I’m not alone in starting to be consistently disappointed by Apple. Look what happened to their stock price after the most recent round of product announcements. 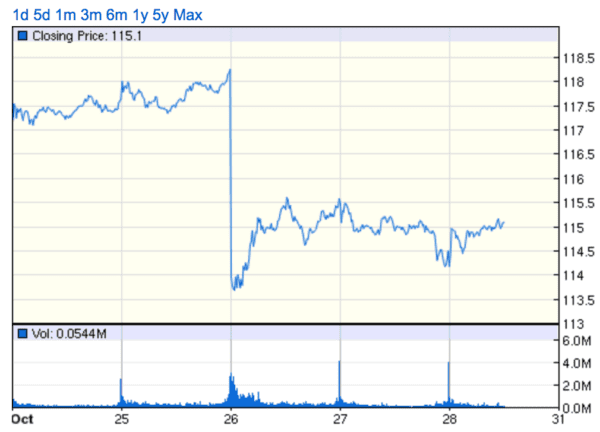 Disappointment. I think that is the word.

Apple’s laptop lineup was 3~4 years old, employed processors three generations behind, and was, frankly, long in the tooth. This was replaced by a refreshed lineup that even at the top-end had a meager 16GB of RAM (non-upgradeable) and a touch-pad that bumped the price by $300.

The Mac mini is a product that could take over homes and offices and be the next gateway drug for Windows users into the Apple ecosystem. But it is overpriced, has non-upgradable RAM, and is technically obsolete. The last update was more than two years ago, and that was a negligible upgrade that was two years since the previous update. (Yes, two refreshes in nearly 5 years.) Talk about a neglected product line.

The Mac Pro—once thought to be revolutionary—is long overdue for a refresh. It’s been over 1,000 days since the last refresh…more than double the usual update cycle.

This is not just me talking. BuyersGuide.MacRumors says “Don’t Buy” for more than half of Apple’s products.

The iPhone has sagging sales, a growth problem in China, and is now taking three years for a major update.

One can only conclude that Tim Cook is the new Steve Ballmer and that Apple is lethargic. (I am not yet ready to declare them “inept”).